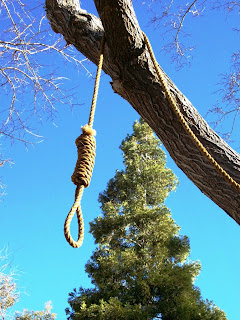 Ever since I have moved, I have a different view from my back deck. It took me a while to come to terms with this unintended consequence but I pride myself on my ability to adapt. That being said, I have in my back yard what can only be described as a hanging tree. It is a fifty foot tall oak with a large horizontal branch about fifteen feet up. Often times, late in the afternoon, I will sit on my deck, sipping the major export of Scotland while enjoying a fine Dominican cigar. I like to contemplate how people in different parts of the world are toiling away at their tedious little lives so that I can while away a pleasant summer evening. I also, on occasion, think about the hanging tree.

I can picture a cowboy, on horseback, throwing a noosed rope over the branch and tying the other end off to a nearby tree. I can see three more horses moving through the cornfield, slowly approaching the tree. As I hold this mental image I lean back in my deck chair and I hear it creak slightly under my weight...


... the worn leather creaked slightly as I involuntarily leaned back in my saddle, away from the dangling noose. "You boys aren't serious about this, are you?" I tried to keep my voice steady.

As Jubal moved his horse closer to me, he reached for the dangling noose and my horse skittered sideways, away from the sudden movement. I saw this as probably my only chance to do anything before they got that rope around my neck. Since my hands were tied behind my back, I reared back, grabbing onto the back edge of my saddle for better balance and brought my leg up to try to kick Jubal from his mount.

But Doc was behind me, grabbing a bunch of my shirt at the nape of my neck and jammed the barrel of his .44 under my jawline. "This ain't our first rodeo. Now settle down." he whispered in my ear. My horse was jumpy but was boxed in by the others and calmed down. As if obeying Doc's command.

Jubal snatched my hat from my head, tossing it to Lucas. "Luke, you need a hat?"

The hat hit Lucas' shoulder and fell to the ground. His eyes were hidden in shadow beneath the brim of his range hat. His mouth was an angry slash across the bottom half of his face. Sitting motionless in his saddle, he let his eyes roam the treeline, looking for intruders. "Get on with it." he finally responded, ignoring my hat on the ground.

With a quick movement, Jubal looped the noose over my bare head and his gloved hands tightened the knot, cinching the rough hemp against my throat. "Now if this here were a proper hangin'," he explained, "with a gallows and all, you would drop down and your weight would snap your neck and it would all be over real quick like." Jubal always did like the sound of his own voice. "But... we don't have no fancy gallows. All we got is this here hangin' tree. So when we whack your pony here, he's going to ride off without you and you're just going to dangle like and then you're going to slowly strangle and you're feet'll kick and you'll try'in use your arms but they'll be tied behind yer back and for a little bit you'll look like yer dancin' on air. Then the fight'll go outta you. But you still won't be dead. You're face'll turn red and then it'll turn purple. Yer eyes'll bug out and yer lungs'll feel like they're gonna bust. But still you won't be dead. You'll just be hanging there all still like but yer brain'll still be workin'."

He reached up and tilted his hat back with his thumb and grinned his tobacco stained teeth at me. "Hell, if'n I keep the noose loose enough, you might swing fer half an hour before you die." He looked around to Doc and Lucas. "Ain't that right, boys?" 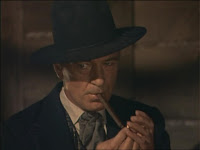 Lucas scratch a match on his britches and slowly lit a cheroot. Then he growled again, "Get on with it!"

I wanted to reason with them. But the noose was so tight I could only manage an inarticulate croak. Now I began to desperately scan the treeline. Hoping for help... for someone to stop this insanity. Hoping for anything to give me more time. The day was cool for this time of year but my shirt was soaked with my own sweat. I twisted to the left to look at Jubal and to the right to see what Doc was doing. Lucas' horse huffed and I twisted that direction.

This couldn't be happening! What the hell had I done that was so wrong, anyway? Jubal moved away to sit next to Lucas. I twisted desperately around to see what Doc was doing. While I was distracted, Lucas drew his pistol and fired into the air, spooking my horse. He reared up and for just a moment I teetered on the edge of eternity, my weight still in the saddle, my booted feet trying to grip the metal stirrups through the leather soles, my toes curling in vain. Then the horse was galloping off through the cornfield as I looked on in surprise and shock...


"What are you thinking about?" she asked from the other side of the table.

"Huh?" I asked, coming back to reality.

"What are you thinking about? You had a funny look on your face."

"Oh... nothing really. I was just wondering how old that tree was."

Cool story.. There is an old film that you should watch... It is available on YouTube... It is so cool. Traumatized me for life. Saw if the first time when I was 7 or 8... It is called, "Occurrence at Owl Creek Bridge" Let me know what you think..