They say that flattery is the most imitated form of sincerity. I'm not sure about that but I am pretty sure that sincerity does not imitate most flatterers. But I stray...

Today's lesson is about Rodeo Clowns. 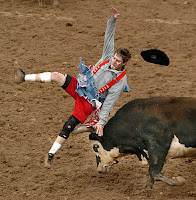 I have been wondering, lately, what it would be like if other professions had clowns to distract danger from their workers. Like, if the guys who put out oil well fires had Derrick Clowns. I envision the Red Adair types struggling against the waves of tremendous heat, the hair on their arms and beards singed off, their faces sooty, their lungs gasping and gulping fruitlessly for fresh air. Suddenly there is a rumble from beneath their feet, everyone stops as they listen to the unseen forces building, the metal of the derrick squeals and groans and everyone knows that there is only one way for this thing to end.

BoBo the Derrick Clown does a somersault out of nowhere, pushing the fire fighters to the ground while diving effortlessly to the platform. He looks around for something he cannot find, turns to the horrified crowd, mimes an exaggerated shrug, hands wide apart, white gloved palms up and then suddenly does a back-flip, landing with his seat in the end of the oil pipe. There is a final rumble from underground and then... silence. After a brief pause, BoBo the Derrick Clown burps, expelling a lungful of grey smoke before doffing his hat to the onlookers.

How about Time-share Sales Clowns? I picture a time-share salesman trying to figure out what tactic to use next. He has already lied to is clients about the free gift to get them there. I mean given a chance at a Hawaian vacation, a new sports car or an iPod Nano, why are they always surprised when they get the iPod? He has already compared the cost of owning a time-share to the cost of spending a week in Jamaica every year for the next 20 years. He has even broken it down to 38 cups of coffee a day over a 10 year period. But these people weren't budging. They were already into the third hour of their 45 minute presentation and the husband just kept shaking his head, demanding his free gift and was even beginning to use unflattering hand gestures when he thought the salesman was looking. There was only one way for this thing to end.

Suddenly, Timmy the Time-share Clown leaps from behind a desk, does a somersault and lands in the wife's lap. As he begins feeling her up with his big three fingered gloves he mimes an exaggerated kiss, smearing greasepaint and cheap burbon all over her shocked mouth. Just as his other three fingered glove is slipping beneath the hem of her skirt the husband bowls him over from the side and Timmy sprawls away, sliding on the tiled floor, striking his head against the fireplace. Timmy the Time-share Clown tries to get up, puts his hand to the top of his head and looks at the blood on his white glove. With incredibly sad eyes and an O-shaped mouth, Timmy falls backwards and is still.

"Oh, my God! Oh, my God!" the wife shouts. Her hands covering her face and her ruined make-up.

The husband is standing still, a horrified expression marring his already dull features. "It was an accident." he mumbles.

The time-share salesman steps between them, a hand on each of their shoulders as he guides them to the next room. Then he shakes his head, whispering to them in a comforting voice, "Maybe there is some way we can keep this thing quiet. You know what I mean?"

As they leave the room, Timmy the Time-share Clown sits up, gives the closed door an exaggerated wink and makes a big O.K. sign with his blood soaked glove.

Tune in next time when we look at O-O the White House Clown.