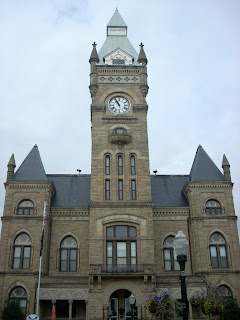 Get your minds out of the gutter. The blog title refers to a Biblical quote that is often misunderstood to mean that "out of the mouths of babes (children)" comes wisdom. Regardless of the original intent, the inference remains.

I had occasion to return to my home town after many years absence and was surprised at my reaction and my welcome. I left Butler in the very early '80's and occasionally returned for the odd holiday or wedding or funeral. This was the first time I had been back since my divorce.

I admit to having had some trepidation about returning. It had been, by my reckoning, about 7 or 8 years since my last visit. During that time I lost my job, had to retire for health reasons, lost my home, and eventually lost my wife. Not exactly the stuff of a "Hail the conquering hero" homecoming. Quite frankly, I was too embarrassed to return home.

But, for some reason, I was in the right frame of mind when I received an invitation to my niece Stephanie's wedding. So I accepted.

When I got to my sister's house I was welcomed with open arms. Nobody asked me a lot of awkward questions and, more than anything, I was happy to be there. I had fun with my nieces and nephews and I honestly think they had fun with me. It was a beautiful wedding and a really fun reception. I got to reconnect with cousins and old friends that I hadn't seen in too many years.

And then I was introduced to the granddaughter of my second cousin. She was only 5 or 6 years old but we had a very memorable conversation. I had stopped, during the reception, to ask her if she was having fun. She said "uh huh" then asked me a question.

"Why don't you live here anymore?"

I thought about it a second and answered, "Well, I moved away because of my job."

"Do you still have that job?" she asked.

"So why don't you live here now?" she asked.

During the non-wedding related time of my trip, I had had occasion to wander around Butler county and visit my old haunts. I went past the house I grew up in, and the grade school I went to (now an apartment building). I drove past my old junior and senior high schools... through several neighborhoods where we had lived and began raising our children... past churches we used to attend... and past a number of old girlfriend's houses.

Many things had changed but many remained virtually the same. But the most important thing that had remained the same was the friendship of old friends, the closeness of community and the love of and for my family. Some things never change.

My number one reason for remaining here has been the friendships I've made. I have met some truly wonderful, interesting and fun people over the past decade. Some of whom I will never forget and others that I expect will remain my friends wherever I may go.

But in another sense, I feel that, though I have washed up on the shores of a seemingly tropical paradise, like Robinson Crusoe, my soul longs for home. I have been marking time, trying to figure out what is next.

And I really did not know what that might be until a little girl asked me, "Why don't you live here anymore?" When she asked me that, I did not know how to answer her. Now I do.

I have a lot of logistics to work out, but screw Tom Wolfe, I'm going home.